Congress shall make no law respecting an establishment of religion, or prohibiting the free exercise thereof; or abridging the freedom of speech, or of the press; or the right of the people peaceably to assemble, and to petition the government for a redress of grievances. 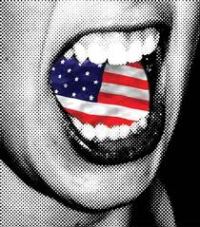 Here is a very telling part of this Amendment, speech and press.  Both are protected, excepting under certain reasons such as yelling fire in a crowded theatre, that I find very reasonable; however, I recently read where a man was arrested and charged with felonies for holding signage protesting the Federal Reserve, I believe on the east coast around Maryland.  (The sign read something to the effect, “GIVE A MAN A GUN AND HE CAN ROB A BANK, GIVE THE MAN A BANK AND HE CAN ROB THE WORLD.”)  One felony count was for Terroristic Threats and the other for Bank Robbery, hmmmmmmmmm?  Another recent problem was a Florida Sheriff being relieved of his duties for letting someone go for possession of a firearm without a permit; the sheriff checked him out and let him go as it should be.  The sheriff’s deputy who started the whole mess was disgruntled because he had several complaints against him and was being investigated.  I just read either today or yesterday that the sheriff was placed back in to his job.  BRAVO!  There are many other incidents where many Police are threatening people with felony arrest for recording them, despite the fact that many courts have struck down such arguments.  The Glick case being won on appeal and was in the words of the Judge that recording public servants is “ancillary to the First Amendment”. 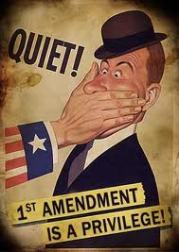 Take a look at all of the laws that are cropping up, lately.  I believe it was one of the California Senators that brought before the Senate a bill to “clarify” who is and who is not “PRESS”.  Unfortunately, our representation (yes, most of them) do little to nothing to protect your rights, or support & defend the Constitution, that piece of paper they took an oath to do so!  The writing is very simplistic and very straight forward…and very understandable!  To amend people’s rights through Laws is both unconscionable and unconstitutional, but as mentioned sometime ago our rights or the limitation placed on the government are not negotiable.

Once you speak something, it is spoken; provided you did not slander or libel someone, or cause them specific harm (aside from the fact that it was true) you should be safe, but with the caveat that you are responsible for what your actions.  Once written, it is considered press and it should not matter that you are not a member of a specific news agency…once written, it is written, same rules should apply to speech should apply here.  With blogging being as in your face as it is, it seems to be the new generation of information.  And at times more up to date and fact specific than the lame-street-media!  The media, or Press (using rather loosely), have pretty much, in my opinion, abdicated their responsibilities and the people are as tired of them as they are of their government.  The people are slowly picking up the gauntlet in order to fight the battle of the Press with useful information, instead of political rhetoric, tripe, and propaganda.

Each of us needs to protect the Constitution, what it stands for, and the Bill of Rights (or Limitations on Government), God knows that it will not protect themselves!  And some of these lawyers and judges should just be activists outside of their profession NOT in the Courtrooms of America!